Motorsport has a certain taste for adrenaline and performance – REBELLION’s DNA! A passion that’s now taking the brand to iconic latitudes. REBELLION Timepieces has become official timekeeper and supplier for the 2023 Dakar Rally.

The Dakar ranks in the top 3 most difficult automobile races in the world, along with the 24H of Le Mans, in which REBELLION participates in the LMP1 category through its REBELLION Racing team. This legendary and spectacular event brings together the international rally- raid elite every year. In January, nearly 500 well-known adventurers and seasoned amateurs will test themselves at the wheel of cars, trucks and motorcycles, combining power and endurance. Invited participants include Carlos Sainz (winner of the Dakar 2018), Stéphane Peterhansel (13 wins in the Dakar: 6 on motorbikes and 7 in cars), Sébastien Loeb (9 times World Rally Champion – WRC), Nani Roma and Nasser Al Attiyah.

“The Dakar is the ultimate adventure, pushing man and machine to their physical and mechanical limits. Like at REBELLION Timepieces! We have a taste for the extreme – the challenge of pushing the bounds of the mechanical watch industry. We’re very excited to be associated with the next three editions of this legendary event.”

“During the Dakar, everyone is racing against the clock. Time differences are measured in seconds and minutes for the first few days, before the notion of extreme endurance really makes its mark on the clock: at the finish, we’re likely to be talking hours when separating out the Top 10 in each category. In any case, precision is important, both for the drivers calculating their routes and for the timekeepers in charge of evaluating them for thousands of kilometres on dunes, tracks and roads. Just as the most successful champions rely on technically flawless vehicles, the organisers count on 100% reliable tools to ensure a fair contest. REBELLION’s expertise in this field will stand us in good stead for Saudi Arabia.”

Official timekeeper of the 44th Dakar, Rebellion was also at the heart of this exhilarating year with its drivers, Alexandre Pesci and Romain Dumas and its ambassadors, Nasser Al-Attiyah and Cyril Despres. Tracks, dunes, dust… The hardest race, the most exciting rally has once again kept all its promises. Frustration, friendship, fatigue, fighting spirit, adrenaline, the emotions during 14 days of competition have been pushed to the limit.

48 hours before the start of the event, a blow of fate struck Team Rebellion. The DDX buggy of Alexandre Pesci kisses and reduces to ashes the ambitions of the Team Manager. Amateur driver, he only does one race in the year. All his energy is dedicated to the preparation of the Dakar. The disappointment is immense. All bets are off, nothing is going to happen anymore. Fortunately, the race is not a game of chance, the Dakar not a casino. A formidable and impromptu chain of solidarity between drivers is set up. Romain Dumas hands over the keys of his car to Alexandre Pesci. Nasser Al-Attiyah, Rebellion ambassador, having heard about the mishap, decides to lend his Toyota, with which he won the World Cup of Off-Road Rallies, to Romain Dumas. The entire Rebellion team could then take the start of the rally-raid. From this misadventure, the sequence of events and the generosity between competitors make up one of the most beautiful pages of this 44th Dakar even before its start!

After a quick warm-up on the first special stage of only 19 km, the big names took to the track without any observation round. Nasser Al-Attiyah (#201) won.

The second Rebellion ambassador, Cyril Despres (#210) took the 29th place. Alexandre Pesci (#251) takes the 59th position. Romain Dumas (#215) discovered his new car and set the 63rd time. The next day, the marks are taken for the Rebellion drivers. Good results allowed them to sign significant performances.

The testing stages followed each other and put a strain on the bodies as well as the cars. If every night, the first ones benefit from the know-how of a physiotherapist, the second ones undergo the hazards of the mechanics.

Thus, at the end of stage 3, Romain Dumas was forced to abandon the race because of an insoluble gearbox problem. Two days later, a broken shock absorber made Alexandre Pesci lose a lot of time. True to his motto of never giving up, he drove his car to the finish line of stage 5 and took the 75th place. The next day is another day. Starting in the last ones, he started a brilliant recovery and crossed the finish line of the 6th stage with the 60th time, despite a complex course composed of a labyrinth of tracks and 40km of ergs to cross.

At the same time, Nasser Al-Attiyah showed strategy and virtuosity at the wheel of his car. The champion finished first at the halfway point with a 48’54’’ lead over the next competitor. Cyril Despres slipped through the ranks at the end of some hard-fought stages to 20th place overall. Marathon stages, kilometers of dunes and endless tracks await the pilots for the second week. Alexandre Pesci’s rigor and fighting spirit give him the possibility to face the many technical difficulties he will meet. He takes up the challenges, special after special, and thwarts the traps of a route revealed only a few minutes before the start of each stage with the handing over of the roadbook. At the bivouac, he can count on the expertise of the technicians of RD Limited, Romain Dumas’ company, to allow his DDX buggy to take the road in the best conditions. Alexandre Pesci is twice in the top 50 in the stages ranking. Thanks to his regularity, he reached the objective, to finish the 44th Dakar, and took the 53rd place in the general ranking.

For Nasser Al-Attiyah, each stage of the second part of the event was favorable to consolidate his role as leader. The “fox of the desert”, supported by his co-driver Matthieu Baumel, won the event with brio. He adds to his rich record of achievements with 3 stage victories and a 4th trophy in the most prestigious rally. As for Cyril Despres, he has shown his pugnacity during this Dakar and takes a deserved 18th place in the final ranking.

Victory is only beautiful if it is shared. During the festive crowning ceremony in Jeddah, Rebellion, the official timekeeper of the 44th Dakar, presented the winners of each category with one of the limited edition Twenty-One Three Hands in the competition colors.

TRYING TO PROGRESS, WHILE HAVING FUN

“Last year, our Dakar came to an end after a series of rolls. The roll bar was too damaged for the officials to allow us to continue the race. But from the start we were hampered by shock absorbers that broke at every stage. The problem has been solved and we hope to have a quieter Dakar. The first year, I finished 43rd and the next, it was Romain who finished 43rd! So we’re going to try to progress, while having fun. Our partnership with the Dakar goes further than simply putting up stickers or renting a car. We wanted to build and develop a car, and I am personally involved as a driver. ” 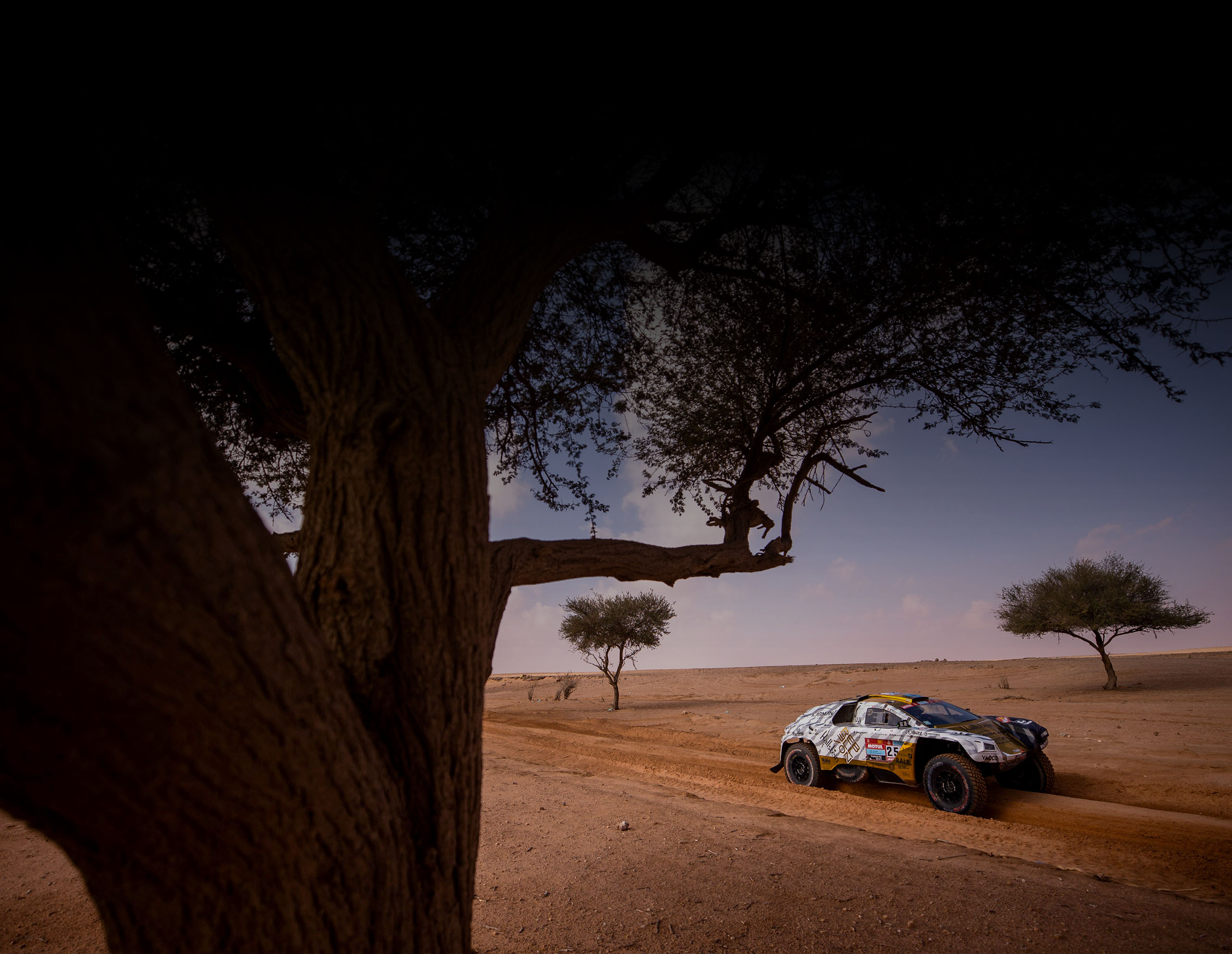 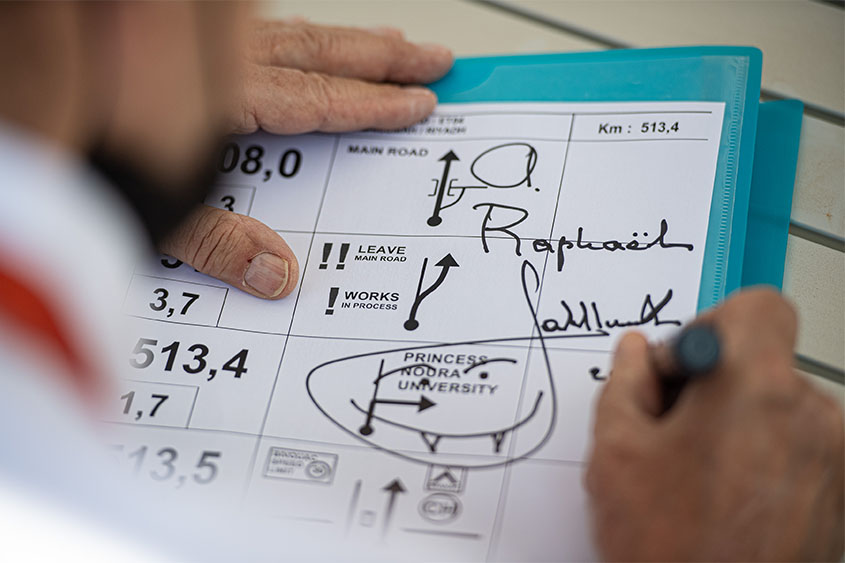 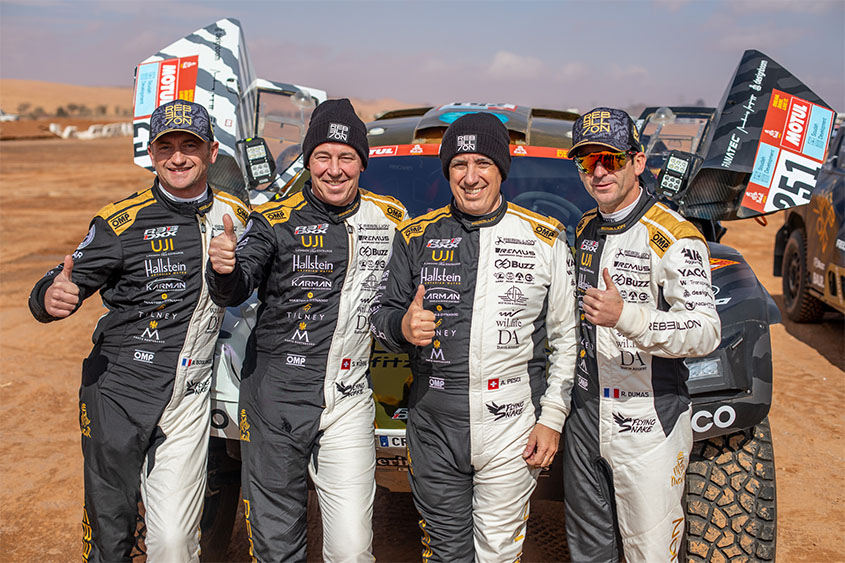 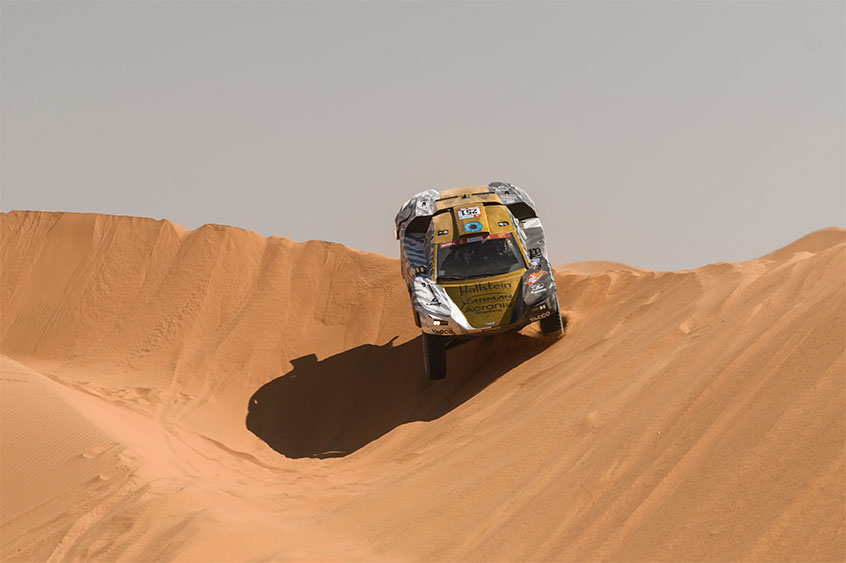 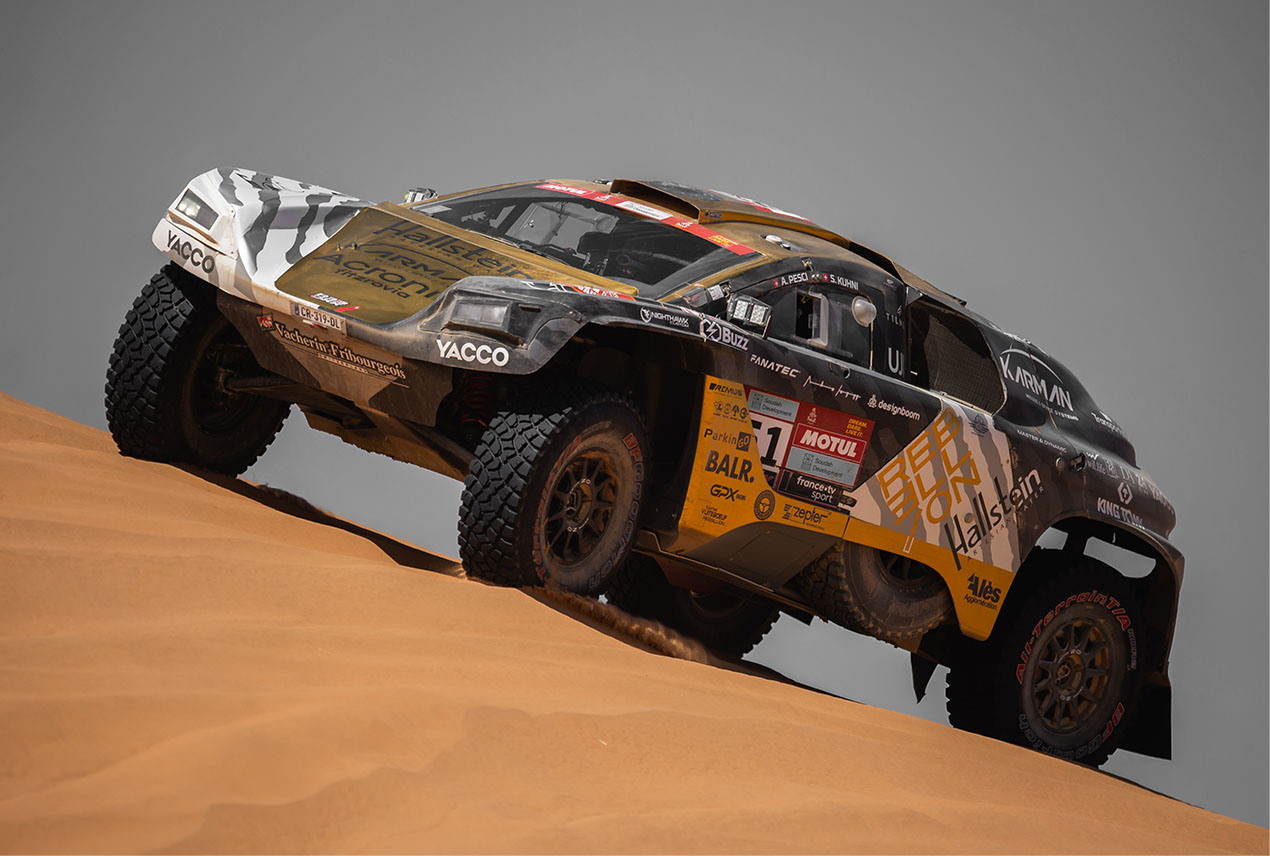 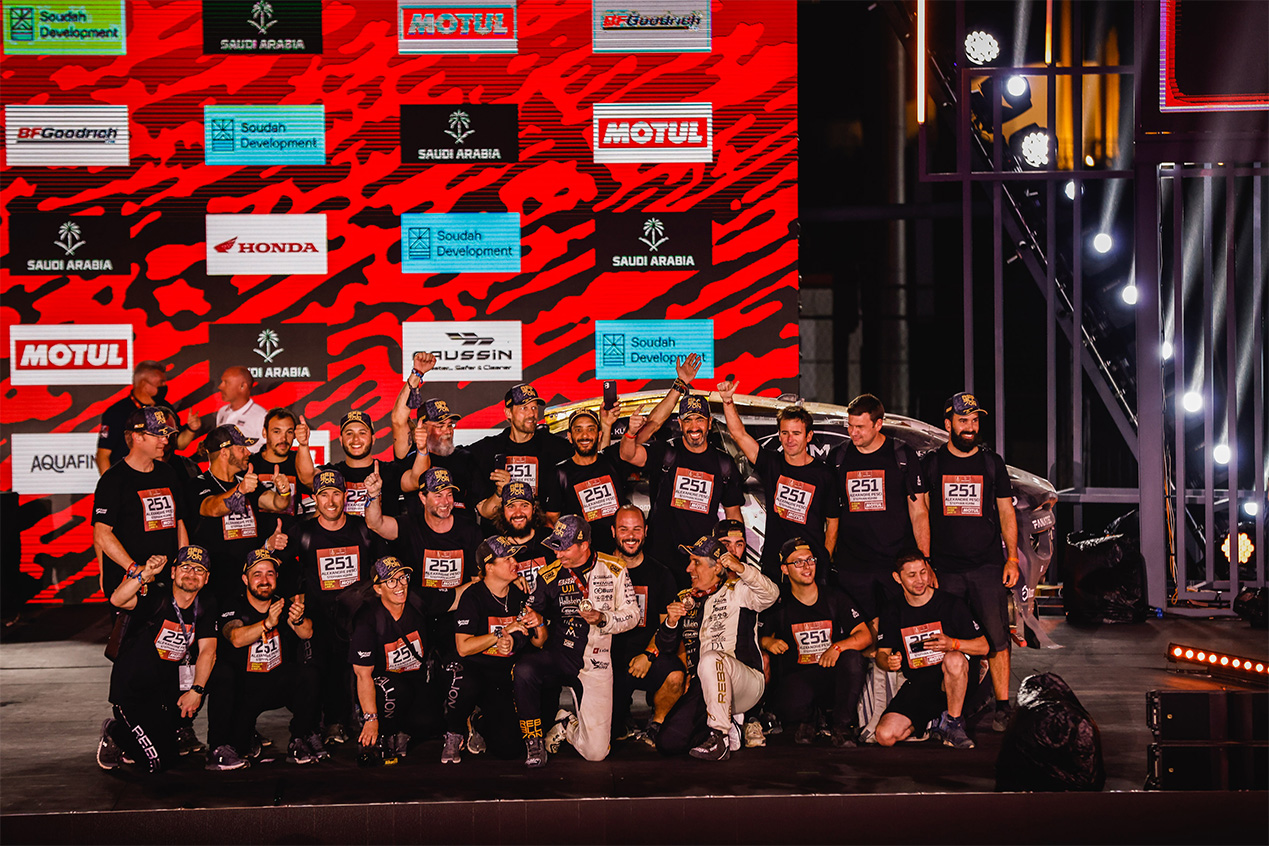 Official timekeeper of the legendary rally-raid for the third consecutive year, Rebellion is celebrating the event with a trio of limited edition timepieces. In addition to a Twenty-One and a Predator Chronograph, Rebellion is unveiling an exclusive Predator 2.0 Three Hands Dakar for this not-to-be-missed event for motor racing and watchmaking enthusiasts. Issued in a limited edition of 20, these timepieces feature warm desert tones and combine a powerful design inspired by the world of endurance championships with precise, robust Swiss Made mechanics. 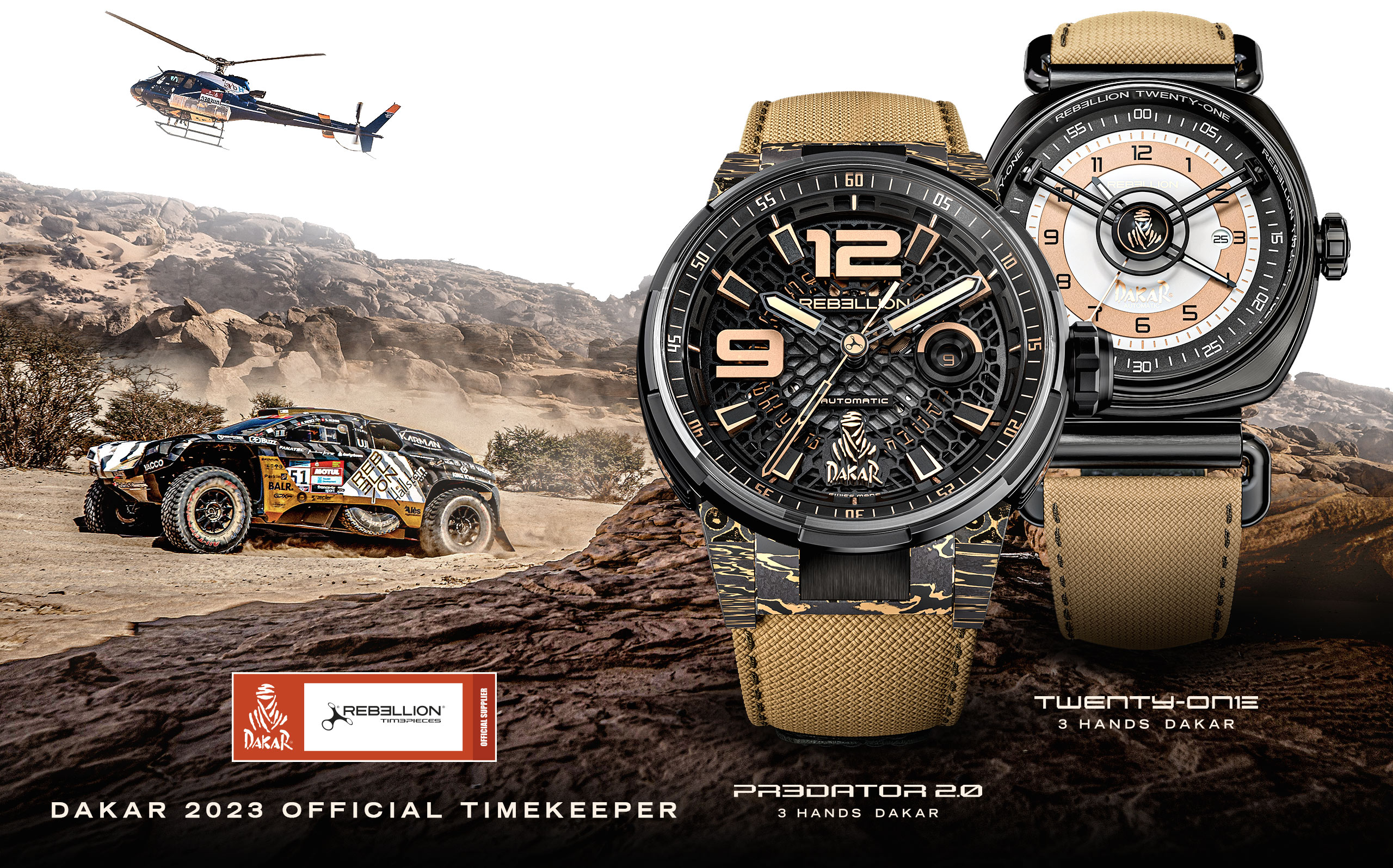 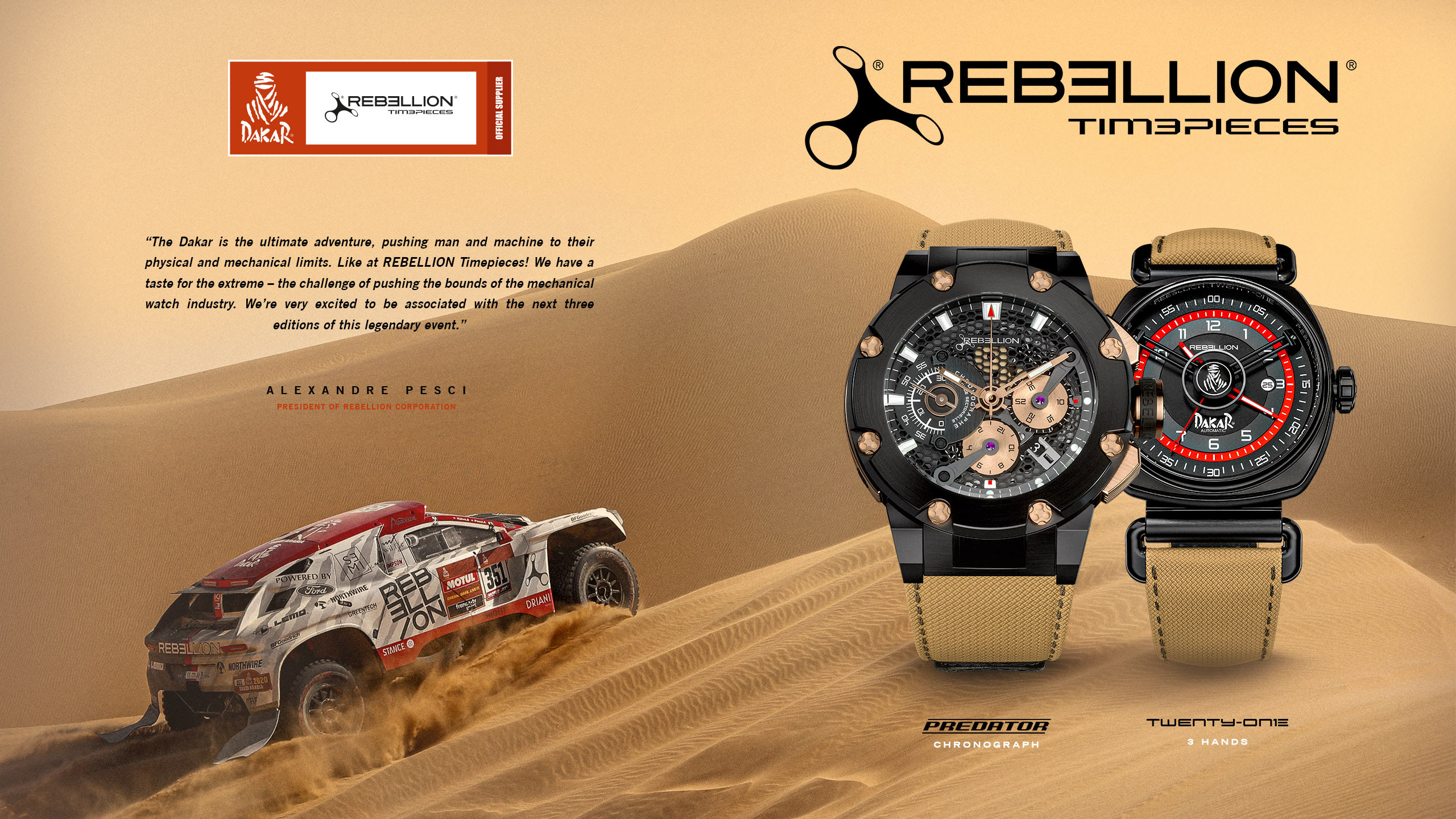 Because the adventure would not have been the same without them, Rebellion Racing would like to warmly thank its loyal sponsors for their unconditional support throughout this epic race.